Panorama NYC: The New Kid On The Block

Panorama NYC is a fledgling music festival based in Randall’s Island Park, NY. The annual event was created by the same producers who run the oft infamous Coachella Valley Music and Arts Festival in California.

Premiering in 2016, Panorama is young. Like Coachella, it’s a three day long music and arts affair. However, there are no camping options available and event goers may choose to buy single day tickets if desired.

For context, I attended Coachella in 2015. That experience will be my frame of reference for this review.

Panorama vs. Coachella: If Festivals Had Offspring

In short, Bud Light is to Budweiser as Panorama is to Coachella. If Coachella could speak, it’d definitely refer to Panorama as “Junior.”

Imagine a smaller and scrappier version of Coachella: The lineup is less developed, the food selection not as comprehensive, and the people not as beautiful.

I attended Panorama with fellow Consider The Product writer Will. We chose to go on a Friday, mostly because we preferred that day’s lineup and partially because I wanted an excuse to take a summer day off from my day job.

Romper-ready, I rode the ferry to Randall’s Island, excited to spend the workday not working.

Entering the grounds, I became acutely aware of the feeling of fresh grass–both soft and green–beneath my feet. It was a titillating delight. Apparently, living in Manhattan’s proverbial “concrete jungle” for 4+ years has rendered me a stranger to nature.

Paper lanterns filled my peripheral vision as I strode deeper into the venue. They were red, pleasantly offsetting the ground’s green. At night, the lanterns lit up to provide soft mood lighting, propelling me into a fairytale land.

The stages were nondescript, and could’ve used better directional designs. I was constantly getting lost, despite how small the grounds felt. I’m painfully direction-blind though, so take my words with a grain of salt.

All in all, I found Panorama to be superior to Coachella in terms of location and environmental setting.

Coachella is held annually at the Empire Polo Club (see: horse race environment) in Indio, CA. Festival goers are thus guaranteed dust and pollen–LOTS of it. An allergy sufferer myself, said irritants are the main reason I’m not itching to go back.

Apparently, Coachella dust maladies are a real thing, folks. Black snot is gross, no matter how you cut it. 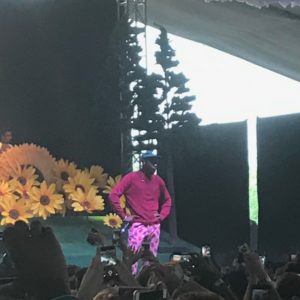 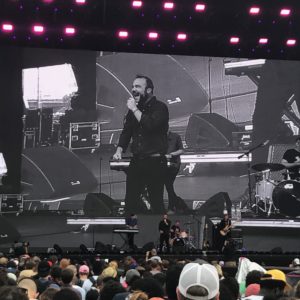 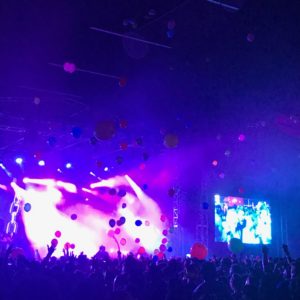 Between the two, each day o’ fun in the sun costs about the same.

Panorama also ends earlier than its counterpart. Last sets at Coachella are typically scheduled for 12 AM versus Panorama’s 10 PM.

I enjoy music, but don’t keep up with any artists or genres religiously, so can’t speak much to the artist selection. Frank Ocean headlined, which I felt merely neutral about.

However, some sets completely blew me away by surprise! I elaborate on this below.

First, Will and I head-bobbed to Future Islands. Next, we jived to Tyler The Creator. Then, we lost our SHIT to Girl Talk. Finally, we basked in Frank Ocean’s buttery voice.

Pre-festival, we were certain Tyler’s set would be the highlight. We were wrong. Girl Talk absolutely stole the show. Post-festival, we waxed enthusiastic about the one-man DJ for hours.

Coachella bleeds materialistic elements and oozes commercial symbolism nowadays. Over time, it’s effectively evolved into a fashion show for celebs and plebs alike, and a Garden of Eden for Instagram junkies to pay annual pilgrimage to.

To me, the People of Panorama seemed palatable, grounded, and less Insta-thirsty, albeit still a tad parched (but who isn’t).

While acknowledging my low attendance record (once per event) and personal preference as limitations, the weather at Panorama reigned supreme IMHO. A comparison, below.

In my experience, here’s what you’d expect if you attended…

…Coachella Festival – You find yourself in a desert climate, where daytime emanates blistering heat registering ~100°F or more. Nighttime–unfettered by the sun’s fiery vigor–unleashes a bitter cold. The drop in temperature is so jarring in contrast that you’re almost guaranteed to need a jacket, which annoyingly weighs down your day bag. Despite bringing a handkerchief, your eyes sting and water from all the kicked up dust and your allergies are flaring up. It’s also getting hard to breathe and you keep coughing up brown phlegm.

…Panorama Festival – You find yourself in a humid subtropical climate where summertime rainclouds loom, threatening short bursts of rain. Despite the clouds, the daytime air is slightly sticky but not uncomfortably warm. At sundown, there is marked cooling of daytime heat, but nothing too drastic. Instead, it is a I-don’t-need-a-jacket type of cool down. The ground comprises mostly well-maintained grass, so there’s very little dust or dirt.

Despite costing as much as Coachella but offering a smaller lineup, Panorama still felt worthwhile. A blast was had and not much was lacking. I suspect this was due to being cognizant that Panorama is still very much in its nascent “can we pull off an East Coast Coachella?” stages. My opinion? It appears you folks can.

Did you attend the 2018 Panorama NYC Music Festival?

Let us know your thoughts by commenting below and/or submitting a star rating!

Unfortunately, we couldn’t make it out this year.

For tickets to next year, keep your eye on Panorama’s Passes webpage.