Chirps Chips: Putting Crickets in American Mouths One Bite at a Time

What are Chirps Chips?

Environmentalists have long praised the benefits of insect consumption as a green alternative to traditional western animal proteins, and after years of resistance, increased cultural diversity and trendy food companies have finally started to remove the stigma from eating bugs. A few months ago, the Seattle Mariners catered to both foodies and a large hispanic fanbase by selling fried grasshoppers at the ballpark, and a quick Google search shows a number of highbrow insect-friendly restaurants–mostly rooted in Mexican cuisine–popping up on the NYC culinary landscape over the last five years. Two Harvard roommates came up with Chirps Chips after one of them experienced the delectable taste of fried caterpillars while studying abroad in Africa. Trying to figure out how to get insects into American mouths, they eliminated the common complaints involving texture and form by putting ground crickets into a high protein tortilla chip. 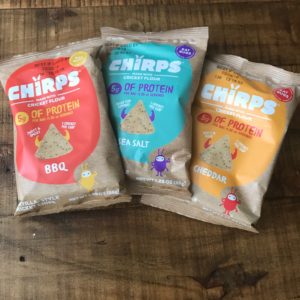 I ordered a sampler pack of three individually-portioned bags (35g), which include their three flagship flavors: sea salt, cheddar, and BBQ. The fit-friendly label touts the high protein content (5g a bag) and displays a brawny-armed tortilla chip. The blurb on the back cheerfully reminds me that eating insects is healthy and includes a few lines acknowledging their sustainability. Rebranding tortilla chips as a health food bothers me, and as relatively sustainable as raising insects may be to cattle ranching, plenty of controversy surrounds the way we grow corn.

When I open up the sea salt, I’m surprised at the size of each specimen. We’re talking maybe half of a normal triangular chip . The first bite reveals a more complex flavor profile than I expected. It tastes more Dorito than Tostito, and there’s an earthiness in the back of my mouth that I assume comes from the cricket bits. Still, the plain sea salt chip feels like it should be a dip-able affair, but the small size of the chip precludes your favorite salsa from joining the party without a big mess on your fingers.

Onto the cheddar. The added cheese and spices really turn things up. The cheddar flavor definitely stands on its own better than the sea salt. It’s also a little too salty and has almost fifty percent more sodium. The flavor of the cheddar is so strong, actually, that I can no longer taste the subtle complexities of the background ingredients (including the cricket).

Finally, I turn towards the BBQ, which is a personal favorite seasoning. The first bite gives off a good 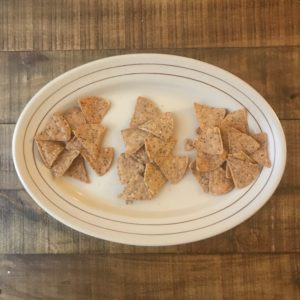 classic flavor that tastes noticeably less salty than the cheddar. Sure enough, the nutrition label reveals a significantly lower level of sodium than the previous bag. The flavor is balanced, and I can taste the funkiness of the cricket along with the BBQ spices. It looks like Chirps has found its Goldilocks zone.

Considering the added ingredients, I don’t see Chirps as a healthy alternative to tortilla chips. Additionally, while eating insect protein is more sustainable than eating animal meat, eating chips with crickets is less sustainable than eating chips without crickets. Marketing malarky aside, Chirps adds some fun variation to the snack industry, and if it helps bridge the gap between an insect-adverse population and a plateful of healthy, sustainable, six-legged bites, then the more power to them.

While not healthy, Chirps is a pretty fun snack that helps introduce insects into the American diet.

Any bug-eaters out there have an opinion on Chirps or know of any other tasty arthropod snacks? Leave your comments or rating below!