Calling All Binge-Watchers! Over The Garden Wall is the Next Binge Thing

What is Over the Garden Wall?

Over the Garden Wall is a perfect reproduction of the kinds of dreams I loved having when I was a kid: texturally rich and magical, bizarre and sometimes scary, but only to the point of highlighting how special it is to explore that fantasy world.  Over the Garden Wall is rich, it is magical, it is utterly bizarre and at times terrifying.  And it is special.  Boy, is it special.  I say nothing new when I say that Over the Garden Wall has set the standard for excellence in an animated mini series.  It’s as if the Brothers Grimm took a short detour through select stages of Dante’s Divine Comedy, as conceived by Lewis Carroll and directed by Hayao Miyazaki with Neil Gaiman on call as the resident fear consultant.  I just finished the whole series last night and I’m already itching for a rewatch.  This is seriously, seriously good.

Over the Garden Wall premiered on Cartoon Network from Nov. 3-7 of this year.  The premise is familiar to anyone who grew up with even a rudimentary knowledge of common Western fairy tales: two siblings become lost in the woods, and on their quest to return home they pass through a magical realm populated by a crew of odd characters.  At least, that’s probably how I’d describe it in a pitch.  You know us PR folks, mind always on the grind.

The first episode begins with an anxious high-school aged Wirt and his perma-happy little brother Greg walking through the woods, inexplicably wearing odd DIY costumes.  After a delightful set of opening lines from Greg that made me smile enough to mention them here, worry-Wirt (get it?  ‘cause he worries) realizes that they aren’t exactly in Kansas anymore.  So begins this animated odyssey.  The rest you’ll have to see on your own.

Luckily for you, there’s so much to see.  Wirt and Greg themselves, along with many of the characters that they encounter through the series, are styled in the same vein as characters in other shows in the Cartoon Network lineup, like Clarence and Regular Show.  But the detail and depth of the show’s backgrounds are a constant reminder that Over the Garden Wall is a hell of a lot more than a children’s cartoon.   Amidst the absurdity of the show’s events and personalities, there’s an elegant and mature realism to the art style that keeps the show grounded: the first hint that Over the Garden Wall isn’t just songs and talking animals.  Any good fantasy needs its villain. 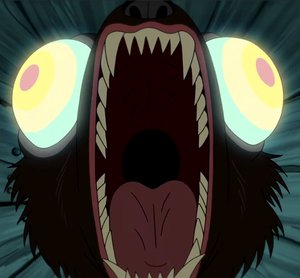 This is just the first episode

This good fantasy has several, each of them scary enough for me to recommend caution when showing Over the Garden Wall to children under the age of 8.  The same detail that seems so charming during brighter chapters makes for some scary visual shocks when events turn dark.

The writing is exactly what it needs to be (remember, this is a kid’s show).  It’s straight-forward enough for younger children to follow along without confusion, mature and engaging enough for adults to watch without cringing, with a few gags that little ones might miss due to their subtlety.  The lyrics to the songs are charming and sometimes quite clever; one of my favorite songs on the soundtrack was unfortunately abridged for broadcast, but word nerds should give it a listen here.  Greg’s singing often seems a little more juvenile than the rest of the show calls for, but even then the rhymes are thoughtful.  Nobody’s getting paid to sit around rhyming “hair” with “bear”.

Speaking of music, I’ve had the intro theme song stuck in my head since I heard the damned thing.  It’s just perfect; it’s jazzy and warm and nostalgia-inducing for something I don’t know I’m missing.  I could write a completely separate piece on the soundtrack alone.  Did I already mention that I’m a big fan of this show?

My only gripe is that the movement of the plot often fails to rise to the level of fullness that this magnificent world asks for.  That, however, might be a product of the art and general sensibility of the show completely shattering the expectations we have for children’s television, while the development of the plot is merely good or satisfactory.

There is so much more I could say about this series, but ultimately it comes to this: Over the Garden Wall embraces what all children know and then slowly forget as they grow old and boring, which is that real and unreal are meaningless modifiers when it comes to the world-building powers of the mind.  Sure, we could ask dumb questions like “So what really happened?” or “What does this mean?” and maybe those of us who are old and boring would sit and think and think and think, and while we thought ourselves into a frenzy we would forget how to sit and feel.  Over the Garden Wall is meant to be felt, not analyzed.  It’s certainly rich enough to merit rewatching, but first it should just be experienced.

Over the Garden Wall is not perfect.  But it is wonderful.

This is a fantastic way to spend two hours. It’s not airing on Cartoon Network anymore, but it’s on the Internet somewhere for those who go searching for it. Highly recommended. Obviously.

If you’ve seen Over the Garden Wall too, leave a rating below or comment!